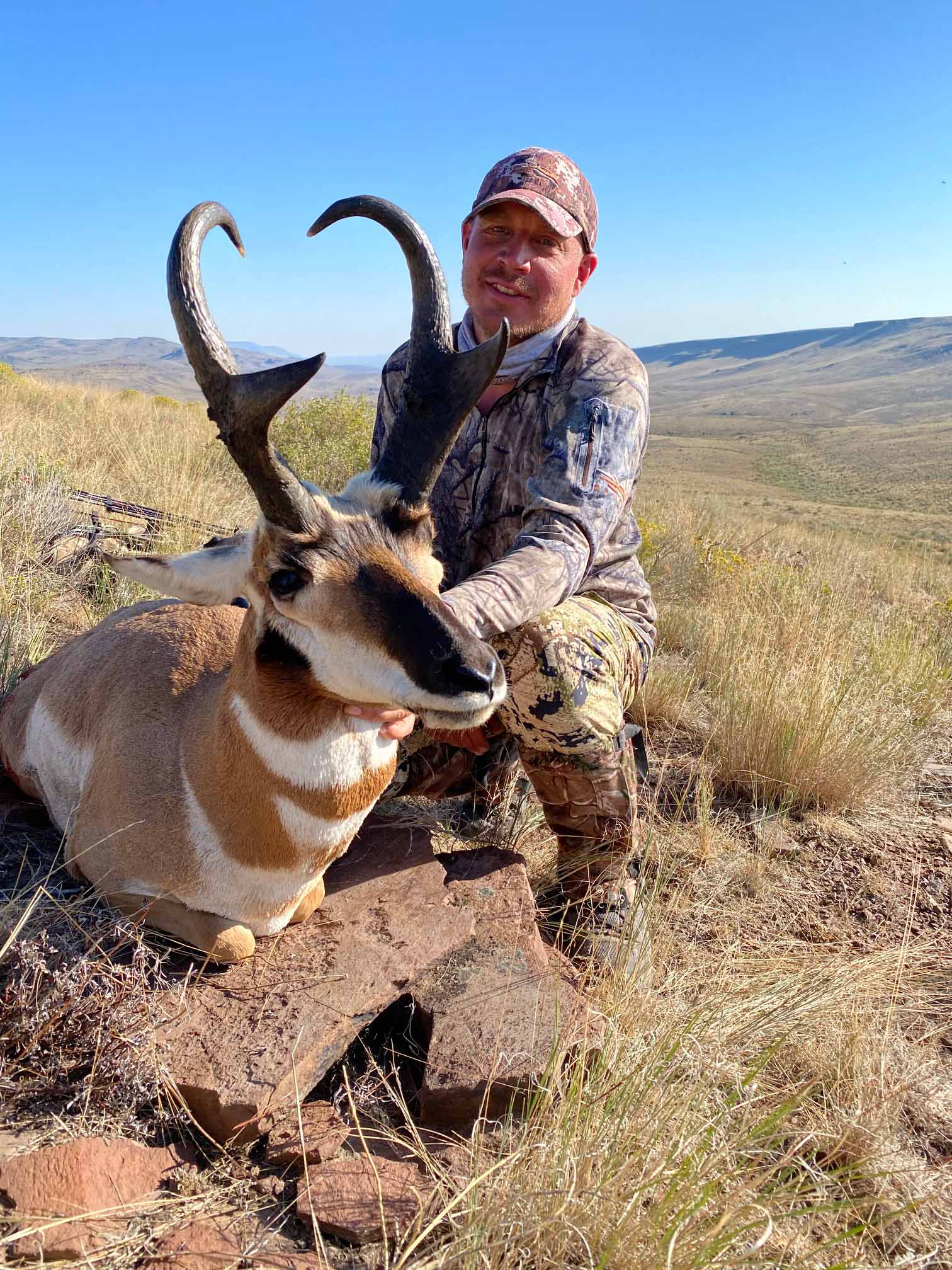 The hunting season has begun with the Pronghorn Antelope opening the first of August.

All of the well known areas are full of hunters making opening day on the prairie looking like a pumpkin patch, due to the many hunters and their blaze orange hats. The main roads and trails also see their share of cars, trucks or ATV’s cruising, which reminds me of rush hour in my home town of Pahrump, Nevada.

Most of these hunters are fine individuals, with the latest equipment and technology. Many “camp” in their motor homes or trailers, often group hunting with family and friends enjoying the social outdoor experience. This is great and the American way, but there is another way to hunt our vast, and beautiful public lands.

My good friend and hunting pal Ben Arada had a different plan. He applied for a bow hunting tag in a less popular, and less populated, area as a back-up to his favorite secret spots. It didn’t have the game densities of the well-known spots and was a little further from home and the major cities, but the smaller number of a particular species means fewer people and less hunting pressure.

Such was the case when he headed out for a week of hunting and camping. The tag was his excuse to get away and enjoy the fresh air and unique opportunities of the Nevada high desert.

It all began down a long, lonely, dusty road with just his best friend Kyle and his dog Layla. There were no expectations of a big trophy Antelope, but perhaps some meat would turn up to take home to share with friends.

After setting up camp they decided to go for a bit of a “look around” and did see a couple of isolated Antelope in the far distance. Deciding to take a closer look they parked the truck, Ben headed out on foot keeping low and following available shallow ravines. He closed in on several small groups, but each time as the wind shifted, or a watchful doe came closer and alarmed the group, they instantly were headed for the next county, at sixty miles per hour. Ben was “busted” and as they say, “That’s huntin.”

On the last and final day of the weeklong hunt they tried again in the early morning dark. As they approached their designated spotting site a few animals were seen in the distance. The car was hidden around a curve and Ben once again grabbed his bow and began the three mile trek to get nearer. Following parallel drainages Ben noticed the group had come nearer. Cresting a ridge for a closer look and was amazed to see the buck of his dreams, even bigger than his dreams.
The Antelope started to move out of sight, but Ben was able to relocate them as they became alert. An old farm truck was coming over a hill in the distance and the antelope warily began to come closer to the silent hunter, then they stopped on a ridge at eighty yards.

Ben had practiced shooting at longer distances and this was at the limit of his comfort zone, but doable. As the giant buck turned broadside Ben drew his arrow and set his sight pin just behind its left front shoulder. As he gently touch the trigger of his release the buck turned just a bit in the opposite direction as the arrow flew, and the herd ducked out of sight over a hill. Ben felt disgusted, again, as they went down a neighboring ravine.

With his heart still beating and the adrenalin rush subsiding, Ben watched the antelope come out of the ravine. First to exit were the does: One doe, then a second, a third, fourth and finally the fifth, followed by the buck. Ben studied the buck through his binoculars, but saw no blood where the arrow should have landed. He then saw a reddish area on the buck’s left flank as it started to stumble and fell down the hill, tumbling twice in the process.

He did it. Upon closing to the big bodied buck, he saw that as the animal turned the arrow entered the left flank and proceeded through the body and protruded at its right front shoulder.

Kyle having witnessed the whole thing from the truck shouted and came running with Layla.

It was the end of a weeklong hunt where nothing was anticipated but a nice camping trip and some winter meat to share. It instead ended with a trophy buck easily scoring high in the record book, if anyone cared, and memories forever.
The moral of the story, don’t follow the crowd to the popular, well known, places. They may see many animals harvested each year, by many more hunters, on crowded roads, all seeking that perfect trophy. Pick a spot less hunted and less traveled; enjoy the camping, hunting, and a traditional, quality Nevada outdoor experience. You may get the surprise of your life.

Beef or pork can be substituted for the Impala it is also good topped with dumplings. Serve with a green salad and fresh bread.