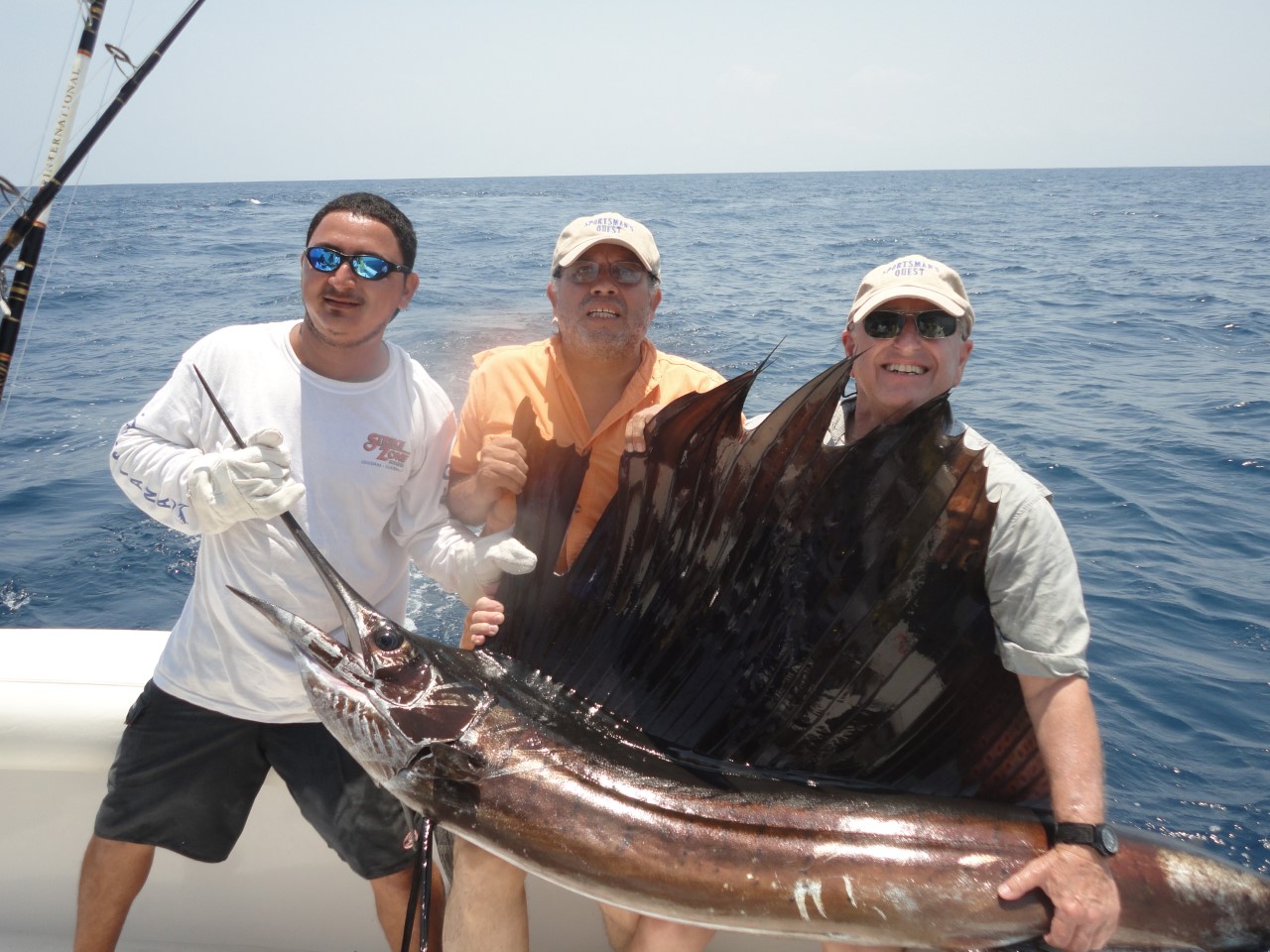 by Dan Simmons
–
“Sailfish,” was the cry that brought the fisherman and crew alive. “Where?” “There, following the boat.”

“Get ready,” the guide instructed, as I snapped on the fishing belt. It took the bait and I waited, as the fish ran stripping line. “Now,” came the command to put the reel in gear. The fish was struck, as he felt the hook, and came out of the water, his blue skin flashing while throwing a foam-like spray. He was on.

This one was larger and stronger than the one of the previous day and stripped more line which I was able to recover by repeatedly pumping the rod and cranking the reel with a smooth, carefully timed retrieval. It was classic and I was feeling great.

Then the unexpected happened. He came straight at me in the stern of the boat and I cranked the reel like a mad man, trying to take up the slack in the line and keep him from throwing the hook. He kept coming; I reeled. Then as I was leaning over the stern rail he came up like Jaws in the classic movie scene. The first mate grabbed my shoulders and pulled me back a bit, but I still could have reached out and touched the fish’s sword-like bill. That got the adrenaline going.

He then went down and surfaced with a great leap twenty yards starboard and I kept cranking the slackened line. Then he was under the boat and surfaced twenty yards to port side before heading for the deep once again to the stern. Yep, he was wrapped around the prop and repeatedly came out of the water as he tried to throw the hook. I was sure he was lost.

The first mate Giobanni was about to jump in the water to free the line when my friend and fellow fisherman Eddy grabbed a long gaff, and while hanging precariously over the stern reached deep into the water and managed to snag the line. Giobanni quickly moved in and cut the line from both the fish and my rod, and joined the lines together using the all important blood    knot as the fish continued to jump repeatedly.

It was tied fast and the fight continued as I first reeled in the slack and again carefully gained line. My arms began to feel the same fatigue my opponent must have been feeling. Slowly I gained line and he turned, came along side and was brought aboard before being released. This was a magnificent fish, had fought well and was the reason I was fishing these new waters.

If you’ve followed this column, you’ve read of some great fishing from British Columbia, Canada, to Brazil’s Amazon region. This recent opportunity to fish a new area was thanks to an invitation from my new friend Omar Marraquin, who is related to long time friends here in Southern Nevada. He invited me to sample the fishing on Guatemala’s Pacific Coast, which seems to be rivaling the legendary bill fishing of Hawaii, Cabo San Lucas, Costa Rica, and the current hot spot, Panama.

The Guatemala sport fishing fleet is not as developed as these others, but it is developing and has some excellent international as well as local charter operations with first-class boats, captains, crew and equipment.  This is going to be the next great international hot spot.

Joining us were Omar’s son Erick and friends Beto and Renee. We set out from Puerto San Jose to one of the captain’s favorite spots for this time of year, forty miles off shore.  It wasn’t long, however, before the lines were in the water behind the forty foot, twin dieseled, Strike Zone, one very fast and well-equipped boat.

This was my second sailfish of the trip; yellowfin tuna and Dorado (Mahi Mahi) also came to the hook. The yellowfin tuna was served as ceviche in at the galley and the Dorado went home for some great dinners.

It’s not unusual to catch 10-15 sails and marlin per day during the height of the season, which is December through February.

For more information on this fishing, go to the website at www.greatsailfishing.com