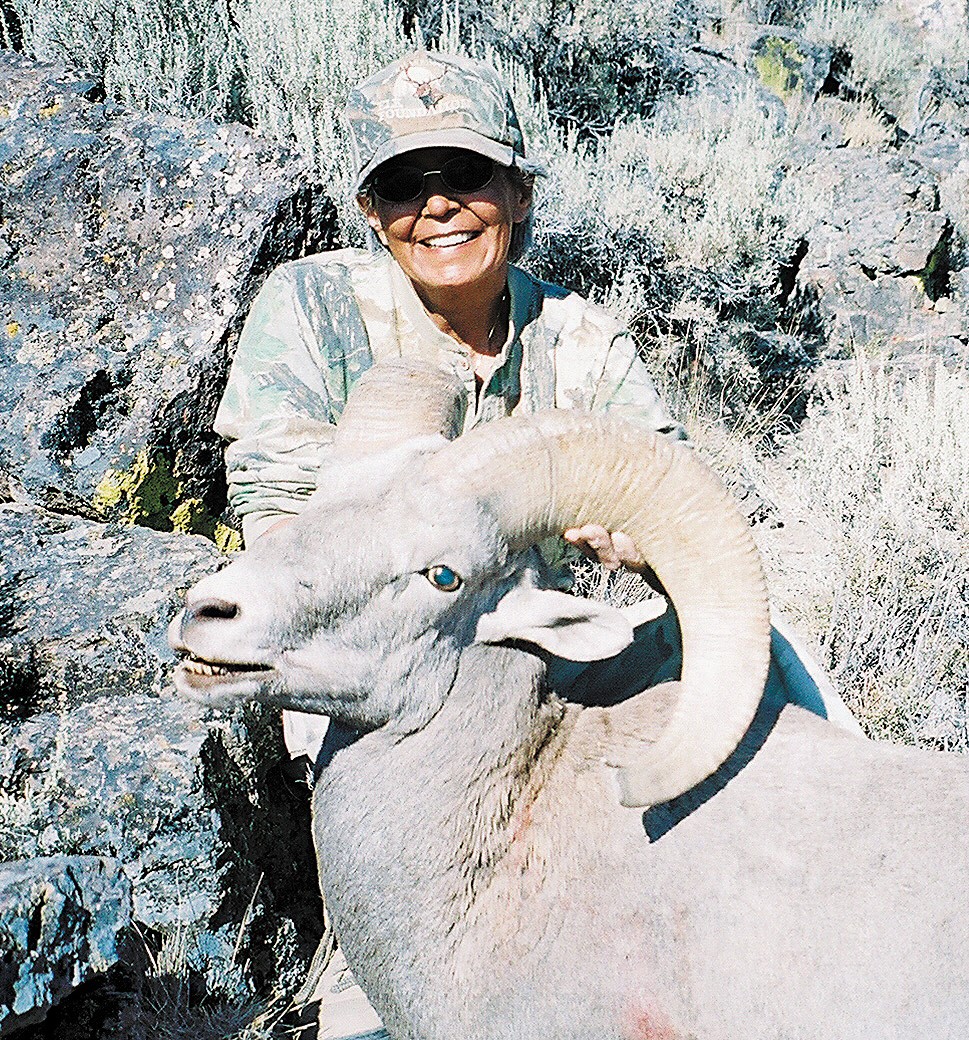 by Dan Simmons
–
Violet Simmons finally drew a California Sheep tag in Northern, Nevada and allowed me to accompany her as camp cook.

It all started twenty-three years ago; that’s when she first started applying for the coveted tag.  You can imagine, then, that she was a little excited when she got the news while visiting family in the Yukon Territory of Canada.  I was excited and relieved too, since I have drawn three sheep tags during that same period.  I was beginning to feel a little guilty.  Well, perhaps not, but I was glad she had drawn and I was looking forward to going along.

She started preparing while still up north by climbing and running up and down some of the local mountains.  Not being in shape wasn’t one of the excuses she wanted to use for not getting her ram and there was no doubt that she was tough enough, so she came home “ready to hunt sheep.”   Those of you that have experienced chasing sheep in Nevada’s rugged mountains know what that means.  It seems every cliff is a little higher, the rocks sharper and the land hotter and drier then it was the last time you challenged it.  The sheep seem a little smarter too, and seem to have moved a little farther back, and higher.  Violet knows and expected just that, having accompanied me on several hunts.  Now it was her time.

The next step was to hire a local guide who would know the local sheep movements and where to start looking.  Guides also come in handy when the animal is down, as you’ll see later in this story.   She selected Mike Hornbarger’s Black Rock Outfitters and guide Gary Coleman.  I had successfully hunted my California Bighorn with Mike, know he is first class, and had heard and read stories for years about Gary’s skill at finding and successfully harvesting game.  He also has a reputation for being tough, yet congenial.  The stories had it right.

On the first afternoon in camp, at the Sheldon Natural Wildlife Range, I was left to get things in order and have dinner ready for the hunter and guide when they returned from their “look around.”   Now, the first day in camp the hunter often gets ready by putting the pack together, sighting in rifles and just getting organized.  When asked by guide Gary when she would like to start Violet replied, “I’m ready, let’s go.”  A surprised Gary, who had been scouting for sheep prior to our arrival, tentatively acquiesced, but wasn’t quite sure what to expect from this lady.

They returned to camp, to a fine meal I might add, with an impressed guide who found “this isn’t like any grandmother I’ve met before; she’s tough and kept up.”  They climbed miles of mountains, and saw lots of sheep.  She was just getting warmed up, though, and was ready to go again.  The next day would be the real test.   The second day was that test.   Starting at first light they headed out, with a nice packed lunch I might once again add, while I was again left to maintain camp and have things ready for their return.

This staying in camp, for an old sheep hunter, takes some getting used to, but the nearby hot springs, a couple of good books and some “closed-eye meditation” makes it a bit easier.  Anyway, I digress.   They returned late that night with stories of sheep, mountain climbing and stalks, but the rams were on the move and repeatedly gave them the slip.  But, they now knew where they were and had a plan for the next morning.

My well-prepared dinner was, although appreciated, “wolfed down” and the hunters collapsed in their bunks exhausted.  I set the alarm for 3:30 AM.   Day three, Violet was up surprisingly refreshed and ready.  Called out to Guide Gary “Let’s go,” had a cup of fresh-brewed camp coffee and they were off by 4:00 AM.

Gary figured the sheep they had been after hadn’t been to water for a couple of days, so they would hike the several miles to a seep he knew they frequented and hope for the best.  It was daylight about 6:30 AM and they sat motionlessly in a shadowed rock crevice midway up the mountainside waiting, and waiting.

At 8:30 Gary whispers “Don’t move,” one is coming down.  Violet’s heart is pounding as she tries to make out the figure in the early light “Where is it?” she asks, and then spots it, and another larger one, coming over the top of the ridge.  Silently they wait as the first, younger ram comes quickly down the hill, past them and to water.  The older larger ram is more cautious and the hunters remain still as they press themselves even closer to the rock at their back.

It comes further down the mountain, and stops across the ravine 150 yards distant.  He fills the scope on Violet’s rifle and is looking intently in their direction, “Don’t move, don’t breathe” and the ram turns broadside.  Gary whispers “Take him when you’re ready.”  Violet controls the tremor in her arms and legs while carefully touching the trigger.  The animal falls forward in a classic head over heels summersault and it’s over.

Well, not quite.  As the sheep keeps rolling, getting closer and closer to a sheer 60-foot drop off. It is about to go over, when one horn snags some sagebrush. This prevents the ram from being “tenderized” by the fall and possibly breaking the horns. The hunters scamper down, drag it back up the hillside, and collapse with exhaustion from the effort and excitement.

Then comes the time of jubilation over a classic hunt. Pictures are taken and the animal is field dressed for the pack back to the truck.  Violet, who is a native Tlinget of the Yukon and whose tribal symbol is the eagle, looked up as they were cleaning.  A golden eagle soared close overhead, circled several times and was gone.  It would be easy to imagine he was paying his respect to a hunt well done.

Gary has a reputation for being tough: he proved it as he packed the 150 pounds of dressed ram down the mountain.  Violet’s tough too.  She packed both her and Gary’s gear, saving him from a return trip.  “This is one tough Grandma,” he repeated.

If you ever get the chance to be camp cook, do it.  It is one of the joys of the outdoor experience, but you need to have a few recipes in your back pocket, and this might just be one of them that you want to try.  It can be made at home (even using beef) but I prefer this over the campfire.

Don’t confuse wild sheep meat with farm mutton, as the texture and taste are much closer to fine range-fed beef.  It is naturally tender and devoid of the wild taste associated with some venison.

This goes great with scalloped potatoes, fresh biscuits (both from the Dutch Oven) and a vegetable.

The Sheldon National Wildlife Refuge was named in honor of Charles Sheldon, a turn-of-the-century hunter, explorer, and adventurer.

His travels through the remote and isolated parts of the west from Mexico, through British Columbia and the Yukon to Alaska opened the eyes of America to its vast diversity and sporting potential. He was instrumental in establishing Mt. McKinley (now Denali) National Park in Alaska.

While exploring he collected many new species of mammals, both large and small, for the Smithsonian National Museum.  Ten of which had never been classified, and over 500 to which he added new information.

He was particularly interested in mountain sheep and their habitat; perhaps becoming the first person to collect all of the recognized species.  This is now known as the Grand Slam, although it was not known as that at the time.

He wrote several best selling books including: “The Wilderness of Denali,” “The Big Game of Chihuahua,” and my favorite “The Wilderness of the Upper Yukon.”  First additions of these books bring hefty prices from collectors, but reprints are available.  These stories are as vivid today as when he wrote them.  A must read for all who cherish our sporting heritage.