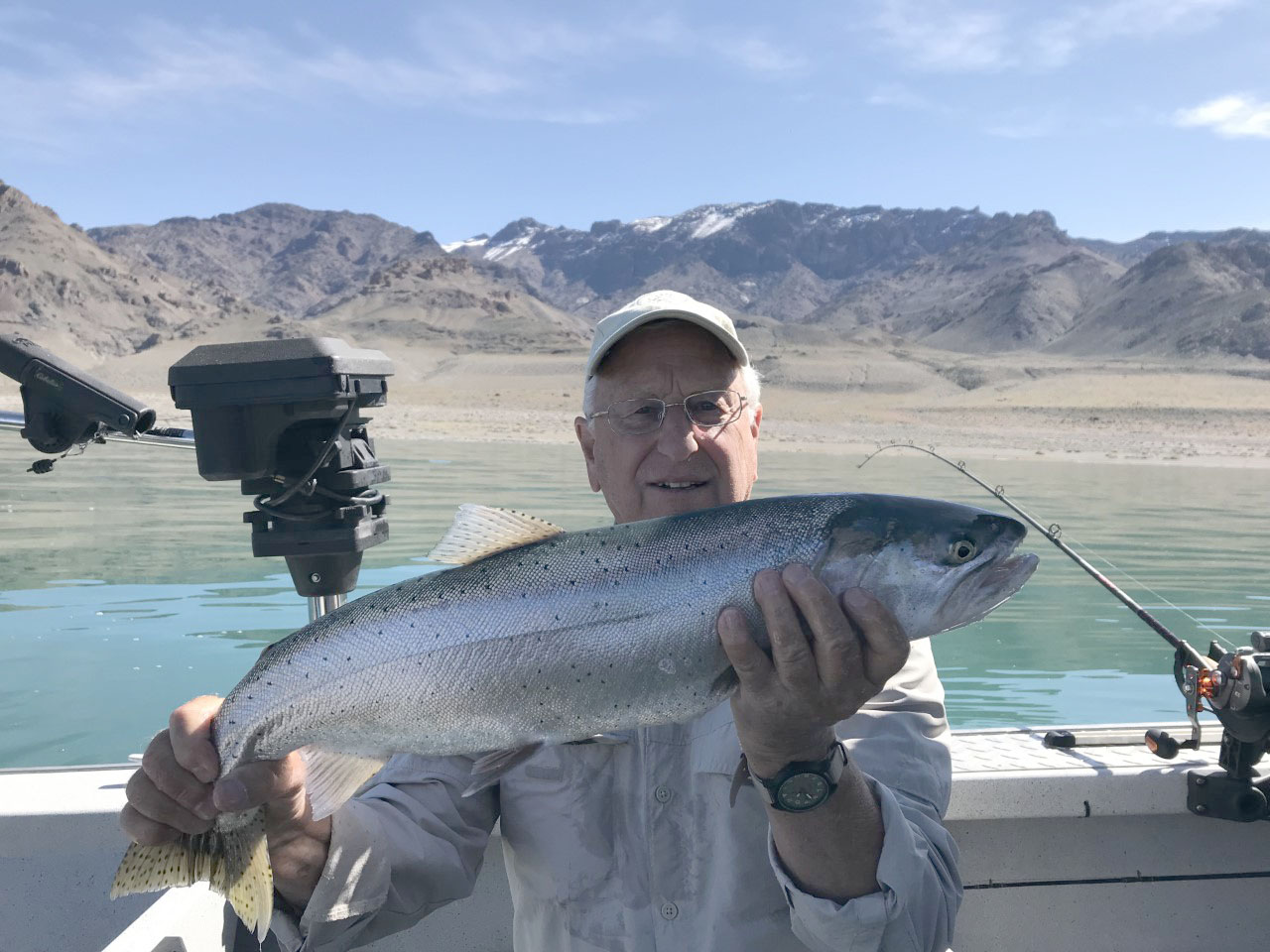 by Dan Simmons
–
Nevada has always been the land of legends, mysteries, and adventures. When it comes to fishing it’s no different, as I discovered at Pyramid Lake, a short distance north of Reno, Nevada.

I found the glory hole for Lahontan Cutthroat Trout. They are abundant with reports of twenty pounders being landed.

There are also reports of mysterious human-like baby creatures and mermaids that are not always friendly. Actually, they have an ominous and dangerous reputation.

All of this was bait to my curiosity and fishing instincts. I was determined to test the adventure.

My next instinct was to call my friend and fishing pal, Mark Fiorentino, with whom I have shared many adventures. He, fortunately, was working in Carson City and immediately agreed to test this new lake with its legends. I knew he would.

So the search was on through the internet and friends at the Nevada Department of Wildlife (NDOW) and a trusted guide with years of experience in the area was recommended. It was Captain Glenn Lemon, of Pilot Peak Guide Service, and a date was set as preparations were set in motion.

I met Mark in Carson City and we headed to the lake, which is on the Pyramid Lake Paiute Reservation.

As it came into view it was like a jewel in the desert and we next observed the unusual sight of anglers fly fishing from shore while standing, or sitting, on ladders a few yards offshore. Some were modified into unique comfortable small casting platforms. This was done to allow them to position themselves closer to a well-known drop-off and cast farther into the lake while also staying out of the cold lake water.

While this technique was interesting we decided to troll with Glenn’s well-equipped 19-foot custom aluminum-built boat with three outboard engines.

It wasn’t long before we were cruising slowly along the shoreline with Flatfish lures in the water at various depths when the boat came alive with a double hook up. Mark’s rod nearly doubled as it reached for the water and I just tried to keep my fish clear as Glenn busily prepared the deck. The excitement began as his fish made a long run then dove for the deep water. “I see color,” Glenn said as the fish was brought close to the surface before making another run and dove again. I, of course, lost mine as I shouted instructions, which Mark ignored, as he brought it to the net.

Our first Lahontan Cutthroat, a nice seven-pounder. This was the first and was followed by several more with Mark winning the bet for first and most fish, but I won a “buck” for biggest. These were our first Lahontans, but we’re already planning our next trip.

As for the mermaids and babies, we saw none.

It was, however, a sensitive subject with the local tribal members who had no doubt of their existence and respected their privacy. The legends evolved from ancient times and burial rites, which is a story for a future article but easily found online.

There is also the unfortunate story of two non-native brothers, who were fishing when their boat capsized and their bodies were never found. Was it due to the extreme depth of the lake, which in places reaches 350 feet, or was it the rough waters, wind, or…..? The mystery continues.

Bottom line, the fishing was better than I imagined and I’ll continue trying for a twenty-pounder. As for trophies, the best are shared adventures, memories, and unique experiences. If you have a “bucket list” this should be on it.

Perhaps I’ll see you on the water one day, if so let’s share a story and a beverage at the local Crosby Lodge.

This recipe makes a great shore lunch, but also a fine meal at the lodge or a table for your favorite guests.

Pyramid Lake trout weigh up to twenty pounds and the large ones should be released, but the two to three-pounders are my favorite for this dish.

My next adventure will be an exploratory trip to a region that’s new to fishing, helping to open a remarkable new lodge, the Lost River Lodge, deep in the heart of the Amazon in Brazil.