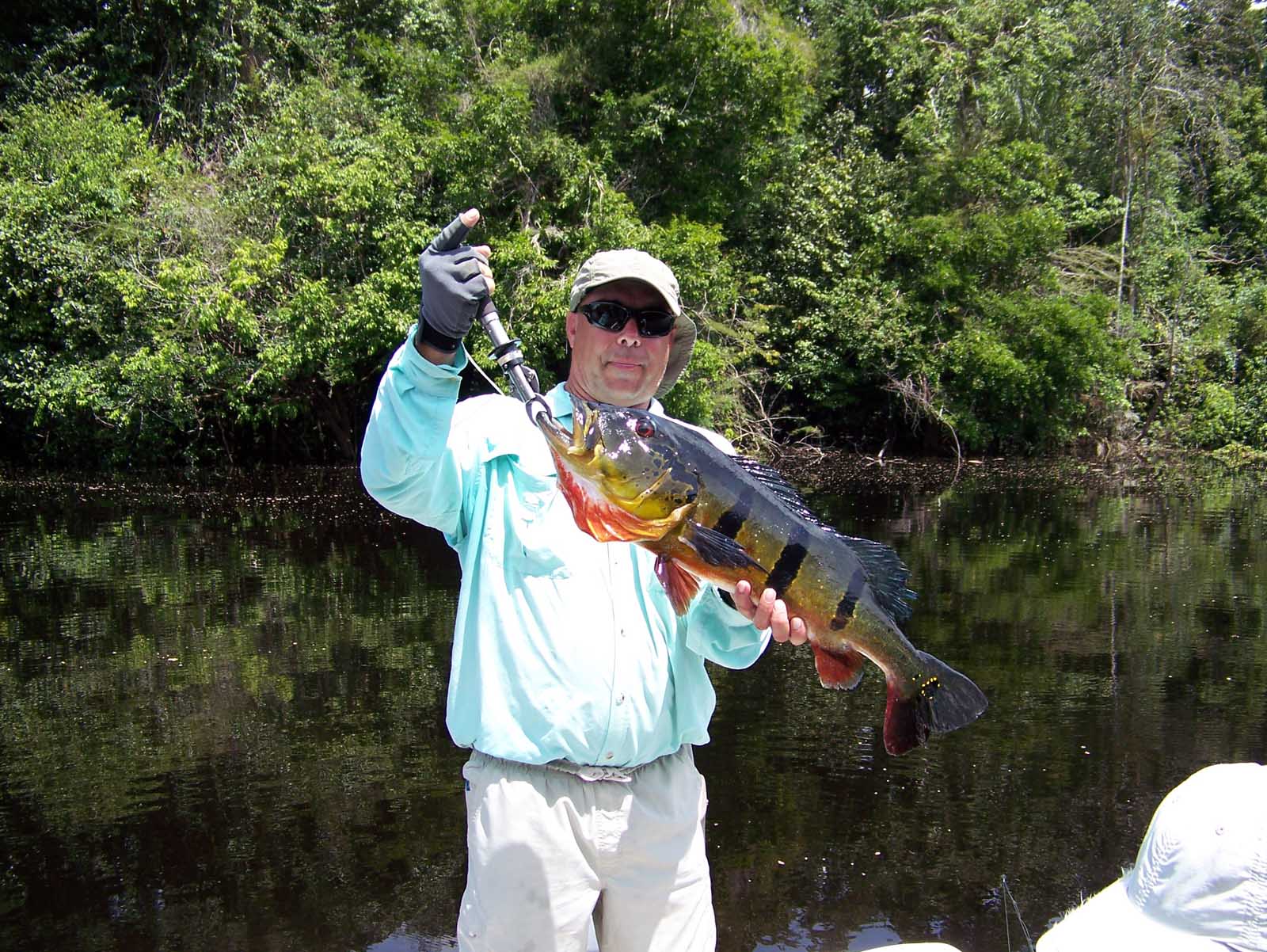 My fishing pal, Ron Cross, a Pro Bass Circuit fisherman from Pahrump, Nevada, and I just returned from a marvelous adventure to Brazil’s Amazon basin. Not only did we explore the Amazon River’s greatest tributary, the Rio Negro, we searched its backwaters and bushwhacked our way into lagoons seeking the magnificent Peacock Bass. This while keeping a sharp eye out for the dangerous giant Anaconda and Jaguar. Ron even swam with the Piranha.

It all started at the Safari Club International Convention in Reno, Nevada. I ran into the legendary Phil Marsteller. He built and operates the first major fishing lodge in the center of Brazil’s Amazon region. It’s the unique Amazon Tours, Rio Negro Lodge and the associated Amazon Queen River boat.

The area is known for its fierce fighting Peacock Bass, which attacks a lure like no other species. Exploding from the water, these beautiful black, gold and red fish strike a large surface lure with the power of an angry beast and strip line from the reel. The angler must be ready to set the hook hard, or risk having it ripped from his hands. These are powerful fish and that’s what makes them such a sought-after prize.

I showed the lodge’s video to Ron and he responded, “Let’s go” and arrangements were made to fish from the Amazon Queen River boat.

We met representatives of the Lodge at the Miami International Airport and be escorted to Manaus, Brazil. Manaus is the hub for the Amazon’s commerce and famous for its once lucrative rubber exports. From there we took a second flight to Barceló, a river community where we caught the Lodge’s fast river boat taxi for the two-hour ride to the Rio Negro Lodge and the Amazon Queen.

On the way we passed smaller indigenous river boats and canoes with people using the river highway to transport produce and other products to Barceló or Manaus. It seemed another world, and as we traveled further upstream, and lost cell phone contact, we saw fewer signs of what we consider civilization. Ron and I were enthralled, excited and captivated by the regions wild beauty.

Upon reaching the lodge, some of us boarded the “Queen.” Yes, we were in the Amazon, but our new home for the week of fishing was not at all primitive. We settled into our comfortable staterooms with hot, private showers, had beverages on the afterdeck and enjoyed a wonderfully prepared meal in the large dining room. Weary from the day’s travel, we slept well with the sound of the water lapping against the hull of the Queen. The next morning the fishing would begin using the fast Nitro Bass Boats which were towed behind the mother ship.

That’s where our story, and the fishing, begins. Our guide, Val, was masterful at casting the large lures and he was a skilled teacher of the necessary technique. Using Shimano, Curado bass reels we would cast 20 to 40 yards to the edge of cover and “rip” the large Lure Jensen Woodchopper lures to deeper water. When done properly he appeared to be chopping at the water as he drove the rod tip down, thus the name woodchopper. This causes the lure to propel forward, the word propel is appropriate as the lure has a large, loud prop like spinner at its end which is attracts the fishes’ attention and cause a vigorous attack. It works.

As the fish hits explosively, I’m ready. “Set the hook,” the guide says with a quiet but emphatic instruction, and the battle begins. “Feels like a 20-pounder,” I say, as it runs stripping line. I’m able to turn it and slowly bring it to net. “What, only a six pounder?” I exclaim, “These guys can fight. I’m not sure what I would have done with a 20-pounder.”

Ron, being more experienced, was much more adept at casting long distances and placing the lure exactly where he wanted. A competition soon evolved between him and Val. Having guided for many years Val was able to cast not only far and accurately, but could reach back under overhanging trees in pockets where Peacock Bass like to hide. Ron was soon doing the same, but not before he had to pull many lures from the bushes and trees. Master it he did, though, and this added to his respect on the river.

He caught fish; his competitiveness kept him working from dawn to dusk, searching for the elusive 20-pounder. It didn’t happen, but he caught what all consider “big fish.” I guess he’ll just have to go back again next year and try for that world record.

Not only did we catch Peacock Bass, but it was exciting and equally rewarding, for me, when I hooked a Fresh Water Barracuda, Amazon Dog Fish, big Catfish or my favorite, the Piranha. All have serious teeth and fight aggressively.

This trip, however, like all adventures wasn’t about the number of fish or game taken. It’s about the road, the trail, or the river: the things you experience, and the people you meet along the way.

We met some very interesting folks – more on that next time.

By the way, Ron wasn’t intimidated as he bravely swam with the Piranha; nor were the many children who swim and bathe in the mighty Amazon daily. It seems there are two distinct species, the Red and the Black Piranha. It’s probably not a good idea to go in the water with the Red ones, but the Black ones, which are in this part of the river, are safer unless you are bleeding or giving them fresh meat. My guess is they didn’t consider Ron fresh, or particularly tasty. But, Ron is my friend and a Legend of the Amazon, in my eyes.

Grilled Piranha are a fish to which you can truly say “Eat or be eaten.” The fish has the fine white texture of Perch or Blue Gill, which can be substituted if you can’t find Piranha in your local pond. They are thus called the Perch of the Amazon. We enjoyed it with Peacock Bass as an excellent shore lunch, but it is something you can also practice preparing at home on the grill or in the kitchen.

I find casting challenging enough, but some of our new fishing friends choose to fish Peacock Bass exclusively with a fly and did quite well with several fish in the 20-pound range. Now that’s really exciting.

An excellent fly is the 6-inch grey, white and red Queen Fish with a 6/0 hook. The most productive however was the Tablada Special with an even larger weighted hook. This seemed to target the big Peacock Bass.