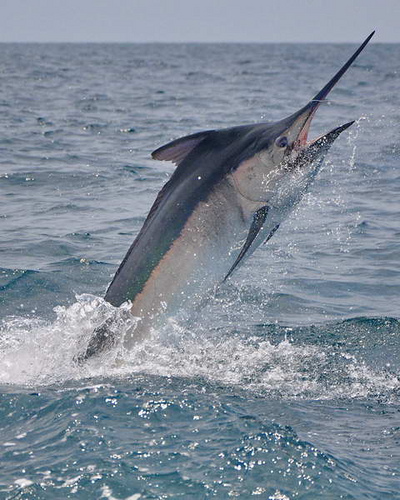 by Dan Simmons
–
This is a story of a really big fish, travel and luck, as are all good fish stories.

It begins in the small fishing village of San Juan del Sur, Nicaragua, an easy four-hour flight from Houston, Texas. I was there to visit friends, get caught up on some writing, and of course relax a little bit with a rod in my hand while dragging some metal and rubber through warm, blue, Pacific waters.

It was late spring, but the warm tropical weather was already showing signs of serious humidity during the afternoon. This meant working in the morning, then spending some boat time as the day warmed – not a bad life.

I was fishing with my good friend, Jorge Aguilar, out of the Gran Oceano Hotel and we were picking up some nice Dorado (Mahi Mahi), rooster fish, and jacks, as was our usual routine. Also, as usual, we were dragging a couple of heavier lines hoping for a nice sailfish or marlin.

As happens occasionally while fishing, fortune smiles. The outside line was hit, took off like we had hooked a freight train, causing us all to “jump to,” grab the rod and frantically bring in the other lines.

It ran for what seemed forever, pulling the 80-pound test line from the reel. Then Jorge told me quietly “Hit him.” I could feel the solid connection to the train and I set the hook again, and again. At this point, we knew it was a big marlin as it headed for the depths, unlike a sailfish which will stay closer to the surface and fly.

From this point and for the next two and a half hours it was a matter of holding on. I would gain some line as the skipper said “Reel, reel, he’s coming up.” or “He’s coming around.” My arms were aching, numb, and heavy all at the same time; they felt as if they were just mechanical rope-like extensions of my body attached to the rod, and to the beast who was clearly getting the best part of the fight.

He would take line at such speed and duration that the reel would get hot to the touch and Jorge would douse it with buckets of seawater, cool it down, and keep the line from melting. This was a first for me, as were the impromptu dousings I received.

For the next hours, the sun beat down, slowly cooking all on board. The dousings of fresh seawater mixed with the pouring of sweat from my reddening forehead, but it all seemed to dry quickly as if poured on a hot stone.

Jorge assured me the fish was tiring and we were gaining on him, but I was not entirely convinced as my arms alternately screamed and went numb. All I could do was hold on and reel frantically when told to do so, letting the rod and reel’s drag system do their job. My thoughts went to Hemingway’s “Old Man and the Sea” and the movie version where Spencer Tracy is talking to the fish, striking it when it seemed immovable lying in the deep. “Take that, and that,” I said as if inventing the words.

I found myself thinking of whole passages from the novel and uttering some as if they were my own, realizing once again, Hemingway got it right.

I’m not sure if it was the marlin’s getting tired or its curiosity, but twice it came to the surface, never jumping, and circled toward us. It would then dive deep, putting the line straight over the side and make a long run, stealing the line I had so painfully gained. I waited, reeled, ached, and sweated some more as Jorge poured more seawater on the reel, and me.

After two and a half hours, which seemed a very long time (I was told to expect a four-hour fight) the fish came up and around; it seemed I could now gain on him and bring him closer. As he came to the surface, all hands prepared to bring him aboard. He came closer and closer and we could see his size and mass, and then he made one more dive for the bottom and we heard the unmistakable, “snap” and the line went slack as the rod straightened. I sat back and didn’t move. All was silent as I heard myself saying, “It’s okay, it’s okay, we had him.” He was released, but not as I had planned.

The old-timers on board then began recounting the fight and getting excited at this largest marlin of the season. Measuring his length, compared to the length of the boat, they estimated he was 17 ½ feet long and weighed 450 pounds. Not Hemingway’s 1,000 pounder, but the biggest fish I’ve ever caught and the beginnings of a new passion for marlin and sail fishing.

So, in this case, the fish and I were both lucky.

This story is still being told around the Hotel Gran Oceano, along with many others, and there will be a next time.

Anyone who has had Mahi Mahi knows there’s no finer fish and it’s excellent baked, fried or grilled. It even makes excellent ceviche.  This marinade was prepared by my friends at Rana Fishing Tours, in San Juan del Sur. It was certainly destined to be included here.

Catch one elegant Mahi Mahi and fillet. Place a fillet portion in a shallow glass baking dish. Combine marinade ingredients in a medium-sized mixing bowl and pour over the fillets until completely covered.

Place in the refrigerator for 2-4 hours. Drain and save the liquid. Sauté the fish until slightly flaky. Cover with some of the remaining sauce and serve with rice and your favorite salad.

Be creative with this one. Add some spicy sauce or peppers, capers, celery, cashew nuts or another of your favorite spices. But, keep it mild to not overtake the delicate taste of this marvelous fish.