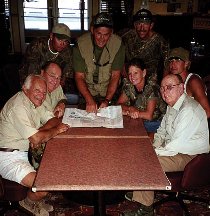 by Dan Simmons
–
The opening day of dove season was one of the best I’ve seen in years.  The population’s numbers are up, small pools of rainwater were still available and the weather cooperated.

This year’s trip really started last June in the High Sierras, while at Andy Oldfield’s Boulder Lodge, on June Lake.  You’ll remember Andy was one of the founding members and past president of Safari Club International (see my article dated June 25, 2004, at www.pahrumpvalleytimes.com).  While dining one evening on some of those delicious June Lake Rainbows we decided to put together an opening day dove hunt in Amargosa Valley, Nevada.  It would be a three-day, two-night excursion based out of the Longstreet Inn and Casino, which was named after the legendary, turn-of-the-century lawman, some say outlaw, Jack Longstreet.

Jack, like many of us, retired to the southwest and southern Nevada in particular.  He had a small ranch in what is now Ash Meadows Wildlife Refuge, and lived out his life in semi-retirement – sound familiar?

We planned to follow in his footsteps and referred to ourselves as the Longstreet Posse.  I am told he also appreciated the local dove hunting and enjoyed preparing these tender and delicious birds for his friends, and the tradition continues.

Our hunting group (posse) was made up of Andy, his son-in-law and daughter Don and Candy Logue, his grandsons Jeremy and Jeff Ross, his brother-in-law Don Kirk, Lt. General “Buck” Bedard and myself   Buck was the former Deputy Commandant for Plans, Policies, and Operations for the United States Marine Corp.  We figured this gave him the experience he needed to help Ol’ Seldom plan the strategy for this three-day hunt.  Now, Ol’ Seldom knows this area like the back of his hand, which he seldom washes, from the many trips he’s made to the local fishing holes. With the General’s experience and Ol’ Seldom’s knowledge of the area, the rest of us were able to just sit back and wait for the action!

The action started at first light on the morning of September 1st.  We decided to position shooters between water and cover, while a couple of us would push doves from the trees & brush; it worked well with fast action for both groups.  It started with a shooting lesson from Andy as the first birds began appearing; it seemed he never missed.  Ol’ Seldom was by his side and truth be told he seldom hit, probably due to his seldom practicing.  All of the family “posse” was shooting 12 or 20 gauge Browning and Ruger shotguns with 7 & 8 shot, and it was apparent that this is a family that does practice and are proud of the fact they “work hard, play hard, and hunt hard.”  They were all proficient shots and good sportsmen (or sportswomen in Candy’s case).  Another motto they live by is “you shoot ‘em, you clean ‘em, you eat ‘em”; and great camaraderie was enjoyed around the cleaning station and continued through the evening’s dinner, the beautiful Longstreet sunsets, the brandy and of course ending with a fine cigar with Andy and the General.

Some might ask; “Why dove hunt?” – as you might expect, I like to start with – tradition.  Dove are one of the most plentiful and fast flyings of the game birds, requiring considerable skill; only achieved through practice.  Like most sports or life activities a demonstration of skills developed through practice ensures success and achievement.  Achievement and good friends, both old and new is why we hunt – Tradition.

You may not know this but Ol’ Seldom has a life partner, Mrs. Seldom, who has learned to cook game birds despite his hunting inabilities.  Her name is Elle Seldom, she obviously has a lot of patience, is a great cook and he seldom leaves anything on the plate after one of her fine meals; nor do I.

If you have a story or something to share, e-mail me at sportsmansquest.dan@gmail.com