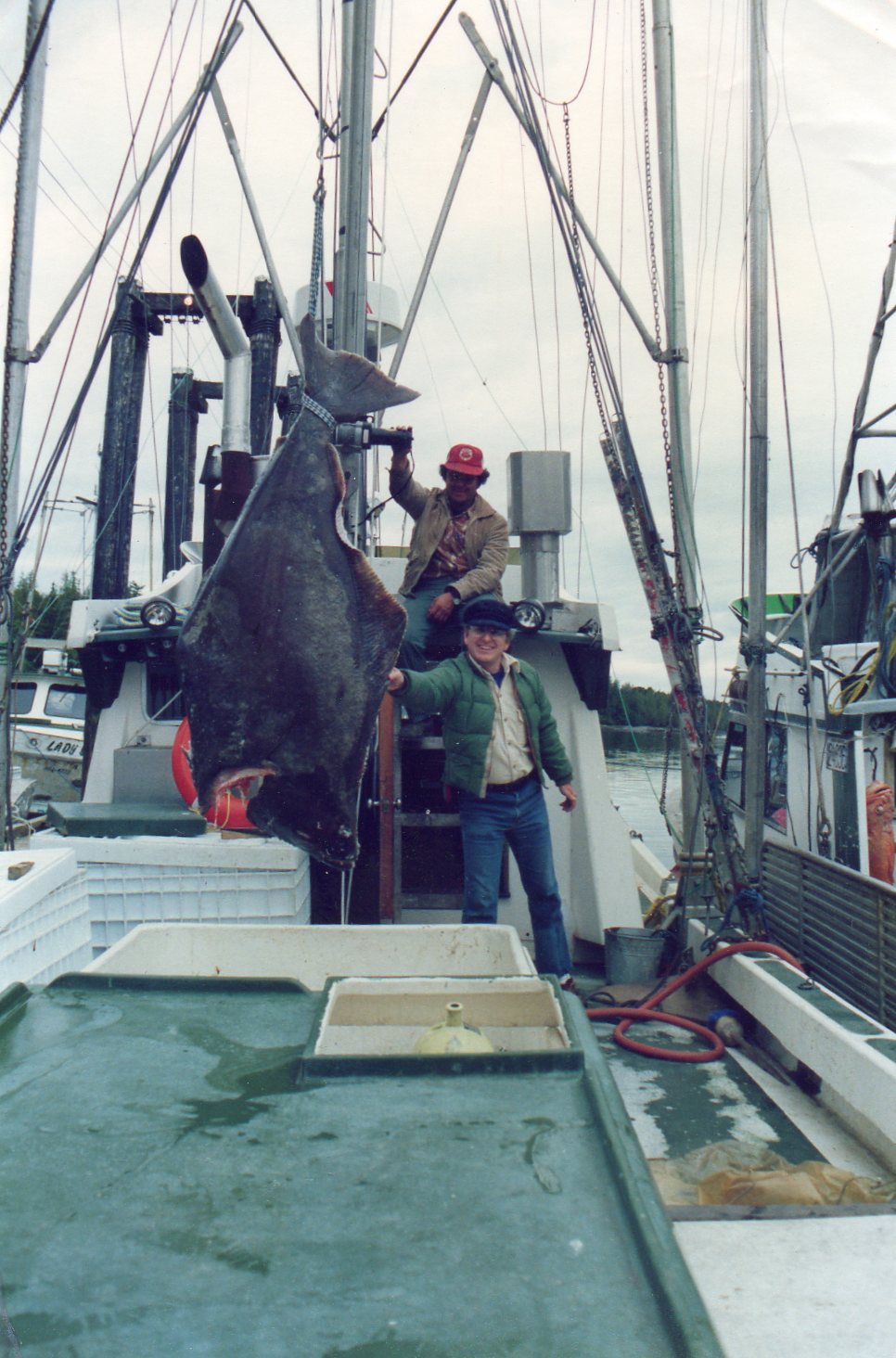 by Dan Simmons
–
There are few things I like more than bottom fishing off the coast of Alaska and British Columbia, Canada. You never know what you’ll bring up.  It might be a red snapper, cod, halibut, or salmon; they all find it hard to pass up a slice of herring suspended a few feet above the bottom, or a squid-like lure with just the right action.

Since some of you are using your summer break to fish these waters, I’ll give you a few tips on catching the big ones and how it came about that a halibut caught me.

I was fishing near Kitkatla, an island fifty miles west of Prince Rupert, British Colombia, where I had accepted a teaching assignment in this native community.

It was one of those late spring days with a soft offshore breeze, a bright warm sun, and no rain for a change.  Everything in the world seemed bright emerald green and azure blue.  It is the reason the cruise ship tours of the Inside Passage to Alaska are so popular.  Nothing matches the beauty of these islands when the sun follows a fresh spring rain.  The dolphins play in these waters as the grey whales pass by on their way north.

I was fishing from the cockpit of my sixteen-foot pocket cruiser sailboat, “The Golden Chuk,” a name given to it by the local natives because of its resemblance, in their minds, of a chitin, mollusk floating on its back.  I personally thought it looked more like the world sailing craft that it was.

I started by drift fishing the deep rocky ledge of the inlet for ling cod and red snapper, using a five-ounce weighted head with an eight-inch plastic squid (hoochy) pulled over it.  I would lower it until I felt bottom, then bring it up a couple of feet, then jigging it in slow rhythmic motions with the occasional fast jerking motion to attract attention.  Eureka; I found a ling cod hot spot and landed first a 40-pounder, then several over 20 pounds.

Next I moved inside for black cod or perhaps a halibut, in eighty feet of water, switching to a five-inch multiple hoochy rig.

I had just dropped the line when I got a bite.  It was heavy, but after one long run it came up relatively easy and then I saw it.  The form of a huge halibut slowly came from the dark waters to within sight of the surface.

I had heard of these “barn door” halibut and these waters are famous for them, but this was my first.  My mind raced. It was easily over a hundred pounds and at least five feet long, as measured against the hull of the boat.  How could I land it?  Without a harpoon or flying gaff, I would have to beach it.  Yes, that’s what I would do.

Then as it came to within a few feet of the surface, the flat fish’s two upward-facing eyes looked directly at me and with what seemed an audible sound spit the lure from its mouth as one would a watermelon seed.  And it slowly submerged as a submarine might.

My adrenalin was certainly pumping faster than his.  He seemed only curious, or perhaps disappointed at loosing his toy lure.

Not one to give up, though, I quickly rigged a triple-hook rig with # 9/0 hooks, each with a fresh whole herring, and dropped it back to the bottom.

Thirty minutes – nothing.  “I am sure he is gone.” I thought.  Then I feel a slight tug on the line; I wait.  Perhaps it’s a cod or a rockfish; another stronger bite and I set the hook.

The line on the heavy reel screams and the pole bends in half – certainly not a cod.  I set the hook again, hard.

I know that I’ve hooked “Fat Albert” again, and I’m ready. Yes, he has a name this time.

There is nothing I can do as he swims for deeper water, and I drift with the swift outgoing tide in the same direction.  I keep the drag tight on the eighty-pound test line and just hold on.

He’s straight down now.  I can tell the last half hour has tired him, and me.  My arms and shoulders are heavy and sore.  I’m not sure how much longer I can hold him.  He then slowly comes up.  I’ve rigged a flying gaff from a large shark hook tied to a heavy line; this time, I’m ready.

He’s taken the bottom hook, and I’ll sink the gaff hook into his mouth when he gets to the surface.  But, he explodes and heads straight for the bottom at a full-throttle panic.  This is where it gets interesting.

The top hook snags the arm of my canvas jacket and I start to go over the side.  As I grab the rail and brace myself I can feel his full strength.  There is nothing I can do as I start to lose the tug-of-war. It took only minutes but seemed longer as the hook suddenly rips through the jacket sleeve, and from the fish.

He’s gone, and I fall back into the cockpit seat and sit quietly for several long minutes.  Perhaps he does the same at the bottom of the channel.

The thought of being trolled by Fat Albert does not escape me.

That is how I caught my largest halibut, or how he caught me. The story doesn’t end there, however. My good friend, Mathew Hill, fished the same area soon after and managed to land “Fat Albert” on a long hand line and this is no “fish story.”

If you have a story or comment about this or other articles, please contact me at sportsmansquest.dan@gmail.com

This is one that I cooked on the boat during a recent saltwater trip to Oregon waters.  As is not unusual, the fishing and the food were much better than the weather.  Fish were caught and a good time was had by all.