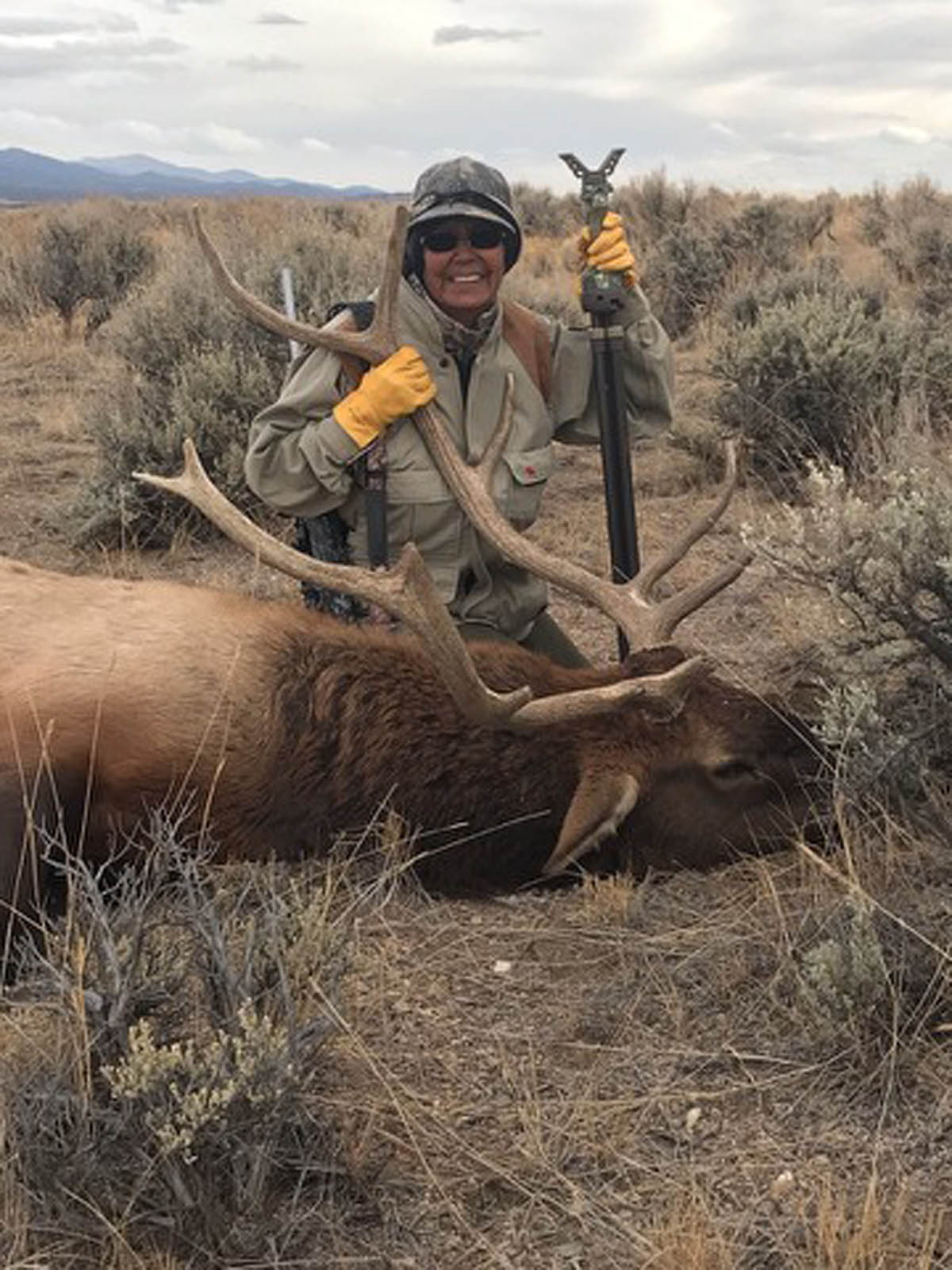 by Dan Simmons
–
It’s that time of year again.  Most big game seasons have come to an end and fishing has slowed.  We may have overindulged around the holiday table; I’m guilty.   While digesting, I thought back on a better-than-expected Covid year. The lockdown and social isolation were bad, but hunting, fishing, and outdoor isolation were good. These included elk, deer, excellent fishing trips and fine upland game hunting with old friends, and some new ones too.

Violet and I were once again able to chase elk and deer with our friend Mark Holt, of Skull Valley Outfitters, out of Pioche, Nevada.  Her tags, not mine, as I once again, suffered through a year of “tag drought.” So, it was her turn to hunt.

We camped near Pioche and scouted until sunset on the first day. On the second day we spotted a nice bull with fifteen cows about a mile away. They were in a small clearing surrounded by Juniper. It would be a long stalk, but Violet and Mark circled around, staying low and crawling on their hands and knees. It looked promising to me as I glassed from the truck and followed the action through my spotting scope; the elk were undisturbed.

It took them almost an hour to reach the animals undetected and close enough for a shot at 150 yards. Then just as she was about to shoot, you guessed it, a quad came racing down the trail behind me with the driver shouting,”Hey, how ya doin, seen anything.” and the elk bolted just as she pulled the trigger.

The Bull dropped, but got up and followed the cows into the thick Juniper as the sun set. They followed the bull’s trail for about two hours, but the herd was moving fast. They lost the tracks in the dark and decided to let him settle down and pick up the trail the next morning.

It was a long night for Violet as a cold front was moving in and we awoke at 0-dark-thirty to snow and a 20 mi/hr wind, but the hunters moved out to find their wounded elk.

While searching another group of three bulls was found with one even larger than the one she had wounded. Many “hunters” would have given up on the wounded elk and harvested the bigger bull, but not Violet. She, having learned the hunter’s ethics from her Native American mother and family, insisted on continuing to search for her wounded bull and they moved on.

While taking a mid-day break they continued glassing and eagle-eyed Mark spotted antlers and a cow elk about two miles away, at the other end of the valley. They took off to get a closer look.

Finding a parallel ravine they were able to close ground and glass the animals at about 1000 yards; the bull was there and surrounded by cows. As they belly crawled through the snow the group laid down, except for one cow which seemed to be on guard as she fed. At 150 yards they were unable to move for fear of spooking the cow, so they laid in the snow immobile as the sun moved closer to the horizon.

With darkness falling Violet set-up the shot and Mark whistled, then whistled again. The bull stood and one accurate shot echoed across the valley from her Kimber Adirondack rifle with a Federal 308 cal.165grain bullet. The hunt was over and the work of field dressing, by flashlight, began in the bitter cold darkness.

I as camp cook and packer was called and together we packed the animal to Mark’s base camp. The next day our winter meat was in the freezer. A great addition to the deer Violet harvested earlier in the year with one clean shot.

I was also able to get in the game when my friend Gordie Ludwig invited me to join him on a Muskellunge (Muskie) fishing trip. I first read and dreamed of this iconic game fish reading early editions of Field and Stream, Outdoor Life and Sports Afield magazines. I immediately accepted Gordie’s offer and our planning began.

We found ourselves on Lake Michigan’s famous Green Bay with our guide and a large assortment of huge custom lures I had never before seen.  They looked like something to be hung on a Christmas tree then used to entice fish, but they worked and we landed three huge Muskies. Another dream came true. You’ll hear more of this adventure in a future column.

Now it’s the quiet season with time to plan more trips and yes, dream of near and far off places, read some of those outdoor magazines that have been piling up on the coffee table or in the book basket, clean gear, organize and put “stuff” away. It’s time to visit friends and talk of the coming year, take a look at those “air miles” and discuss logistics.  Perhaps this is the year for that “big trip.” “I’d better do it while I still can” – this is the season of dreams.

If we were lucky, or planned well, Santa was kind and new “stuff” may have appeared under our Christmas tree, perhaps a new Kimber, and now we look ahead.  Will I draw a tag this year?  I’ll try; you can’t draw if you don’t apply.  Can I travel?  I hope things get back to normal, but I’ll have to work enough to buy fishhooks, bullets, and gas.

Who knows? Maybe dreams can come true, if we give them a little help.  This is the year to give a little more time to the family.  Plan an outdoor adventure, take that hunter safety class, or introduce a friend, young or old, to hunting or fishing.  This could be a very good year.

This BBQ sauce would be perfect for Violet’s elk.  Start with the following marinade then grill over medium heat for 3 minutes on each side, brush with BBQ sauce and continue grilling until desired doneness.  Serve with extra sauce on the side and a baked potato.  At my table it would be followed by a glass of merlot and a fine cigar.