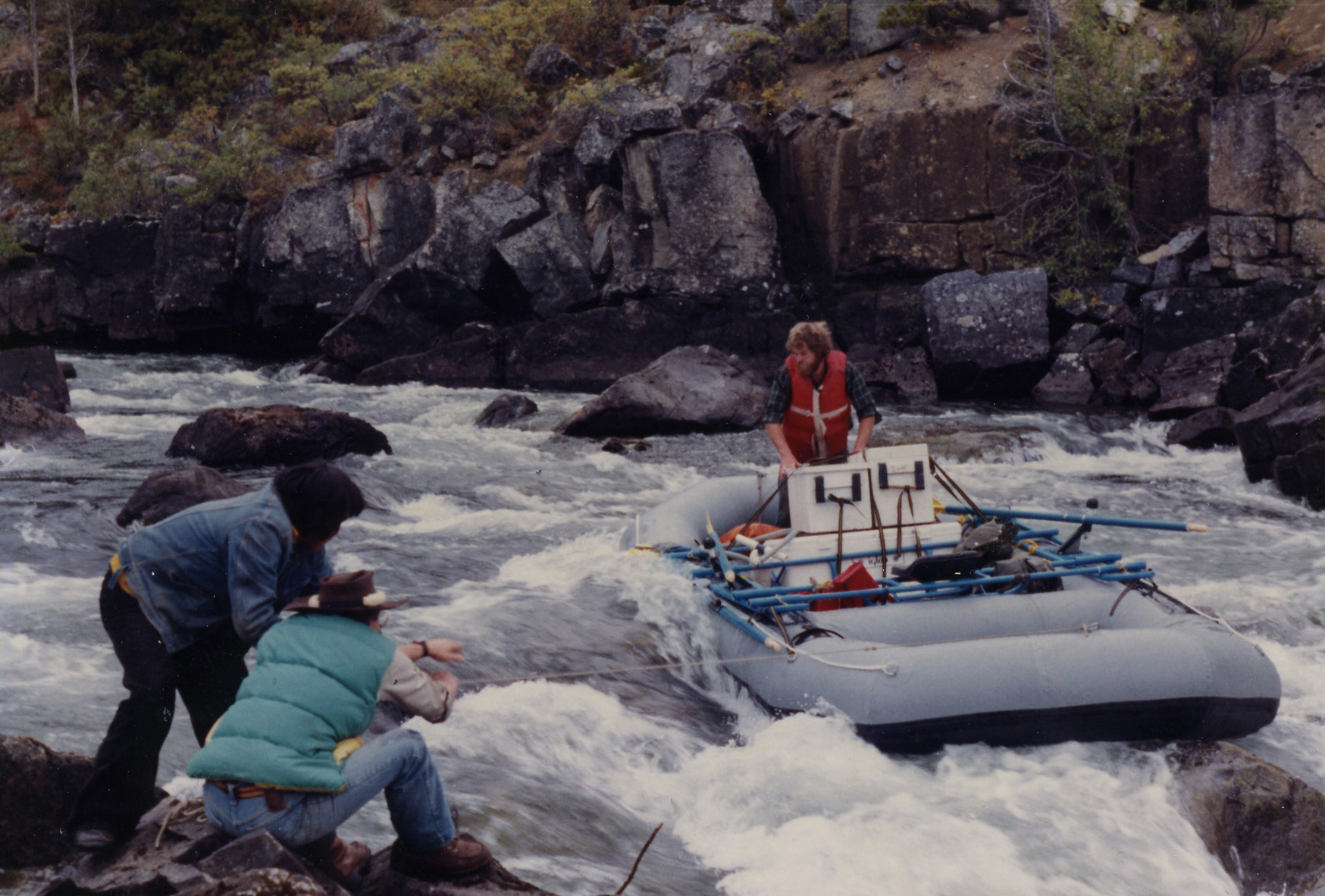 by Dan Simmons
–
This is the story of a river, the hunt for a great mountain goat, and a true wilderness adventure.

The river is the Stikine, one of the last of North America’s wild rivers.  It runs from the high Spatsizi plateau in north-central British Columbia to the coast and the Pacific at Wrangel, Alaska.

The Stikine is also known as “The river that’s never been run” because it courses through the narrow passage of the Stikine Canyon.  I’ve seen kayakers and rafters try, but they never make it past the sandy area above the canyon, where they are often lifted out by helicopter.  I’ve also seen large logs above the canyon, but never below; only pieces make it through.  The lower end is a great place to gather firewood for a picnic.

The river remains wild as are the many mountain goats along its cliffs and it’s one of the few places a person incapable of the extreme rigors of high mountain climbing can successfully hunt this incredible species.  This aspect appeals to me more each year as I gain experience and wisdom (read age).

Little Dease Outfitters, run by Mike Danielson and his charming wife Carol, have the hunting concession in this area and know it well.

On one hunt, as they were guiding a gentleman from the south, the plan was to hunt the rim of the canyon by horse and foot.  They would ride the ridge then walk to the rim and glass the area ahead, then get into a position to intercept the goats as they came up to feed.

As with all good plans, it seems simpler than it is in fact because unless the hunter is extremely skillful and nails the goat on the first shot, the goat’s instinct is to go for the cliff, and it’s straight down where only a goat should go.

Mike has had to climb “fingers and toes” down its cliff face to retrieve a goat, but not this time. On this hunt, the hunter knew exactly what to do. He shot well and was successful.

It was then time to go in search of a moose, the giant of the north.  They trailed a short day’s ride to moose camp with its anxiously anticipated wall tents, wood stoves, and comfortable cots.

Now I enjoy lodges with gourmet food, a Jacuzzi at the end of the day, and all the luxuries, but nothing can match the true wilderness experience of a tent camp far from the nearest hint of civilization.  This is the real way to hunt and the tradition is alive and well in the north of Canada.

The plan here was to ride and hike to hilltops (referred to in the north as knobs) and glass small lakes, “feed lakes,” where moose are found eating succulents from the shallows at the water’s edge.

When a desirable moose is found it is then stalked, or called into range as only experienced guides can do.

On this segment of the hunt, it went as planned, once again, as the hunter took home enough meat for the winter and a 55-inch set of antlers.

And next?  It was fishing in some of North America’s greatest trout streams and lakes with an abundance of rainbows, brook, and lake trout, not to mention the ever-abundant Arctic grayling.

Is this the ultimate wilderness hunting and fishing trip?  You decide, but it’s got my vote.  Is it in this year’s plan?  We’ll see.

We all know that the backbone of a successful wilderness trip is preparation.  We also know that a northern outfitter’s wife is usually the preparer.  This is certainly the case in the Danielson family.  Mike’s wife Carol is a master at making sure that everything gets in the panniers and the grub box.  Here’s one of the special treats she sends along with the hunters.  It’s easy to prepare at the end of a long day and is something that everyone looks forward to.  This can be done at base camp or home in the desert.